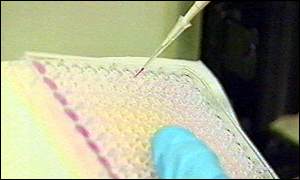 Tests for thyroid deficiency are controversial

A doctor offering controversial treatments for thyroid problems has been suspended from practice by the General Medical Council.

GP Dr Barry Durrant-Peatfield, 64, who has a practice in Purley, Surrey, has been stopped from working for 18 months so that the GMC can complete its investigation.

This may or may not lead to disciplinary action, although Dr Durrant-Peatfield says he cannot afford to fight to clear his name, and plans to retire.

He now cannot treat or prescribe medicines for patients unless the suspension is lifted, and told BBC News Online he was “outraged” by the decision.

“All the GMC wants to see is my head on a spike,” he said.

Dr Durrant-Peatfield, who works outside the NHS, is a controversial figure in thyroid medicine, offering treatments which are actively opposed by many other endocrinologists.

The complaints to the GMC allege that the private GP had failed to examine patients properly, and gone on to prescribe inappropriate drugs.

He has received vociferous support prior to the GMC hearing on Friday from a large number of past and present patients who wrote to the organisation praising him.

Many say their lives have been transformed for the better by his treatment regimes.

One, Linda Thipthorp, from Truro in Cornwall, said that treatments from other doctors, involving radical surgery, had done nothing to improve her condition.

‘My health is still improving’

She said: “After being successively treated by the NHS I could not walk, only crawl about on my hands and knees.

“To be asleep was the only way I could cope with the pain.”

“Dr Peatfield diagnosed immediately what some 20 other doctors had failed to do. After three days I began to feel alive again and my health is still improving nearly three years later.”

The controversy centres around the diagnosis, and treatment of patients with hypothyroidism – a condition in which the thyroid gland in the neck is not functioning properly.

Patients diagnosed with the condition have a slow metabolic rate and are normally given supplements of the hormones produced by the gland to make up for the deficiency.

Dr Durrant-Peatfield prescribed a “natural” form of thyroid hormone – which is derived from the glands of animals, and given in dessicated form.

This was the form in which thyroid hormones were originally produced at the turn of the century, but were phased out in this country, with many doctors now saying that synthetically-produced hormone is best.

This, they say, is because it is difficult to know exactly the concentration of hormone that is being delivered by the natural form.

In addition, Dr Durrant-Peatfield believes that standard thyroid function tests used by the majority of doctors are unreliable.

He recommends heavier reliance on something called the “basal temperature test”, which involves measuring the internal temperature on waking.

Conversely, many other doctors treating thyroid patients maintain that blood tests for thyroid function are reliable and accurate, and that it is the basal temperature test that is misleading.

However, Dr Durrant-Peatfield said it was “impossible” to misdiagnose a patient if a proper clinical history was taken.

“Blood tests are appropriate in some cases, but I don’t necessarily believe them,” he said.

If patients who do not actually have hypothyroidism are given, over a long period, extra hormones when they do not need them over a long period, there is thought to be an increased risk of bone density loss – which could make patients’ bones more brittle.

There is also thought to be an increased risk of heart problems in these circumstances.

However, the GP insists that there is no evidence of any of his patients suffering physical harm as a result of his treatments.

He said: “I am totally and utterly devastated about this, both for my own sake, and for my patients, who now cannot receive their treatment.”

A spokesman for the GMC confirmed the 18-month suspension by its Interim Orders Committee.